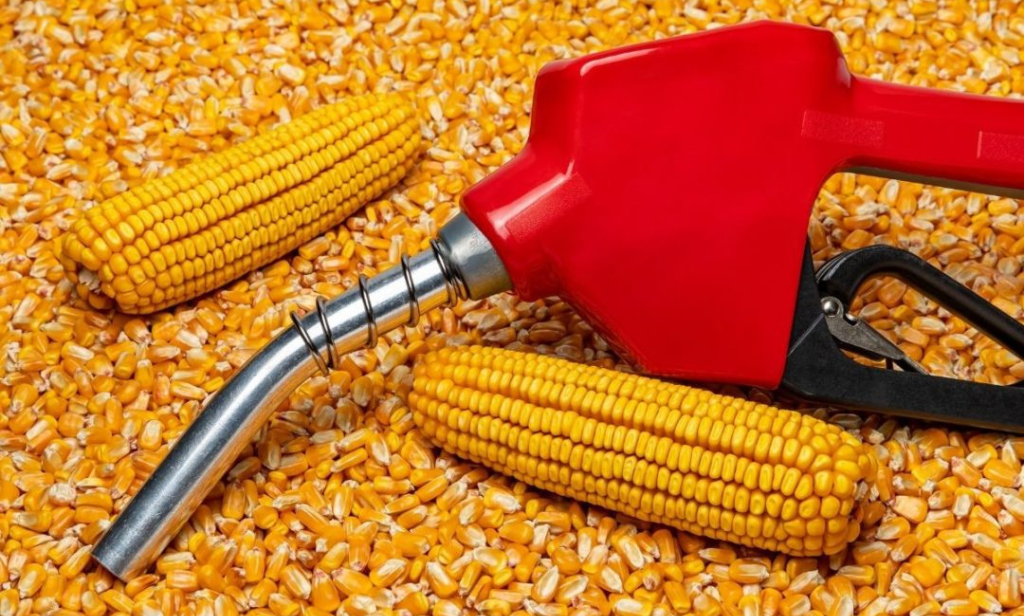 Corn is grown and appropriated not as a food but also put to use to generate ethanol, which can be used as fuel to operate internal combustion engines in order to avoid the usage of exhaustible resources. The price of the liquid fuels has been increasing gradually in India, it causes harmful emissions as well, and the effect can be noticed if we see the air quality index of different states. In order to search for an alternative, we need to shift our view towards bio-diesel which can be used as the substitute of the exhaustible resources and it produces less harmful gases. One of the potential resources for producing bio-diesel in India is corn, which is largely cultivated crop in Northern India. The total number of vehicles have been increased from 5.4 million to 210 million between 2005 and 2015 in India. Due to the uncontrolled mobility in urban areas, the environment has been affected from the exhaust gases so badly in many states. In few major metropolitan cities, the pollution level has crossed the permissible limit of PM2.5, which is set up by WHO. According to the WHO database, 14 out of 15 most polluted cities in the world, belongs to India only, Kanpur tops the list of the most polluted cities in the entire world with 173 micrograms per cubic meter and Delhi secures the sixth position with pollution level of 141 micrograms per cubic meter according to the PM2.5 database in 2016. Total 11% of the carbon emission is accounted from the transportation; it was 24% in 1971. The effective move, which was taken by the Indian government, was switching to CNG and India operates maximum buses on the road, fuelled by CNG. This country owns 11.75% of total natural gas operated vehicles and holds the third place, running behind China (23%) and Iran (17%). By 2030, India is aiming to be the third largest automobile manufacturing country after USA and China and this is the high time to impart innovations to this specific domain, which can cause less PM, CO2, NOx and SOx emission. Biofuels have great future prospects in developing nations due to energy insecurity. Large agricultural sector can be a good support in order to produce biodiesels from crops. Shuit et. Al [3] stated that the fourth assessment report of IPCC concludes that the reason behind global warming for last 50 years, mostly due to emission of harmful CO2, nitrous oxide and methane. Transportation has been identified as the major source of air pollution in megacities since last century. The bad effect of motorization leads more petroleum-based fuels to be used in road transport that directly affects the human health. On the basis of an analysis, which has been done by taking data of 50 countries and 35 urban areas that vehicle per capita has been increased at the same rate as income per capita. Countries like India, China and Pakistan where growth rate of passenger cars are double than that of income per capita. India has secured the place in top 10 among biggest emitters of atmospheric pollutants. Road fuel consumption is nearly doubled in every ten years since 1975. Biofuel can be used to meet the future needs of mobility and it can safeguard the environment and human health as it does not contain any sulphur or metals, which contribute to the acid rain by producing sulphuric acid. Peng et al. investigated different parameters and the limited data projected that exhaust emission in terms of total vapour phase hydrocarbons, total carbonyl compounds, total poly aromatic hydrocarbons etc. were lower when biodiesel was used. Global energy demand will be increased by 4.6%, almost 70% of it will be utilized in global emerging markets and developing economics. Global CO2 emission is heading towards the second largest annual increase ever in 2021, coal demand is set exceed the demand of 2019 and approaching towards the 2014 peak. Utilization of natural gas is being increased by 3.1% in 202. Renewable sources retain the success in these days in power, industry, transport and heating sectors. A report named Net Zero by 2050: A road map for the global energy sector stated that 7 Gt of CO2 has been emitted from global transport sector in 2019 and it is expected that it will be around 5.5 Gt by 2030 if we use the other environment friendly fuel and 0.7 Gt by 2050.  As per the report published by Indian government on World Bio-Fuel Day named Bio-Fuels towards Atmanirbhar Bharat  it is concluded that biodiesels can enhance India’s energy security and reduce petroleum dependency. Few potential resources have been identified in order to get bio fuel from the crops and government is implementing policies to spread the awareness among citizens. India aiming to produce 20% ethanol blended biofuel by 2030 and 3% contributor to global ethanol production. Therefore, many initiatives have been taken to produce bio-fuel at higher rate in India using different techniques and waste management strategies. 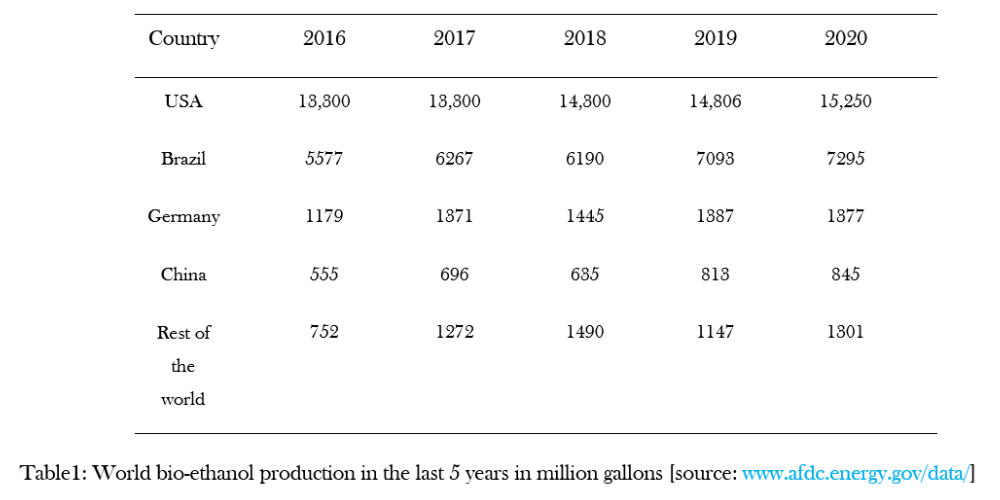 The world’s corn production capacity is near about 1.05 million thousand tons, whereas the USA tops the list of producing corn which is estimated at 360,252 thousand tons. In 2020, India has produced 30,250 thousand tons of corn. It was 5101 thousand tons in 1971 and it is growing at the rate of 4.67%. According to ICAR, India secures 4th in area and 7th in production among the maize producing countries. Corn production area has been increased to 9.2 million ha during 2018-2019. Average productivity has increased by 5.42 times from 547 kg/ha to 2965 kg/ha, productivity in India is almost half of the world. 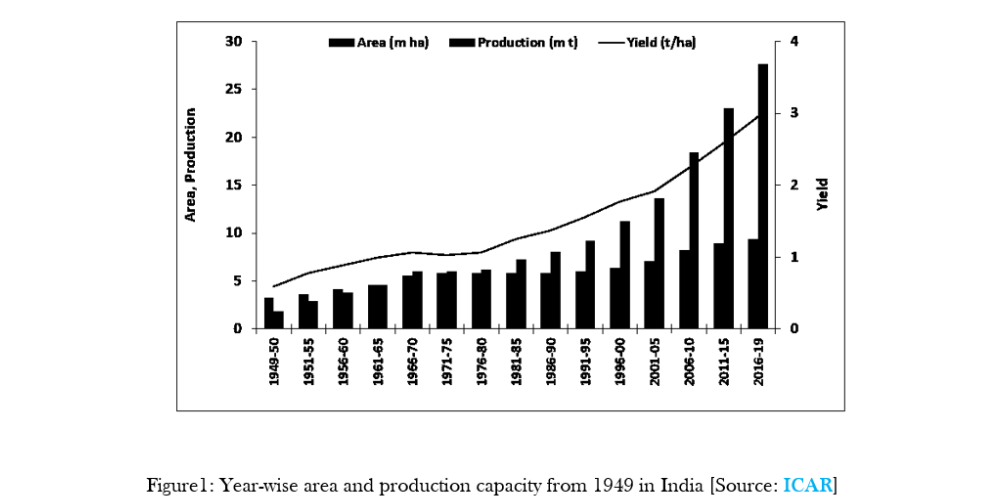 Madhya Pradesh (15%) and Karnataka (15%) clench the first position in terms of highest cornfield area accompanied by Maharashtra (10%), Rajasthan (9%) and Uttar Pradesh (5%). Whereas Andhra Pradesh secures the top position in terms of corn production, it is as high as 12 tonne per ha. Looking at the statistics of corn production and the potentiality for bio-ethanol to be used as fuel, it is said that corn can be one of the major grain resources in India to produce ethanol. Chemical composition of corn revels that it contains 72% starch, 9.5% fiber,9.5% protein and 4.3% oil. It is investigated that 56 lbs of corn can produce 30.7 lbs of starch or 35 lbs of sweeteners or 21 lbs of polylactic acid polymers and can produce 2.87 gallons of ethanol. This ethanol can be used with diesel to improve the emission and it also fulfils the need of the alternative fuel in the automobile sector in India.

Corn has to undergo many processes to be considered ready for ethanol production. The first step is to remove the kernels from the cob, this process is known as postharvest where all the stones, soil, sticks, etc. are removed by means of scalpers. A huge bio-technical is associated followed by three steps –

Milling is the first step of the biotechnical process and it can be classified into two main categories namely wet milling and dry milling. The main purpose of the process is to break-down the starch into simple sugar components whereas the liquefaction process is done in order to make the simple sugar soft for an efficient enzymatic digestion. Indian government has paid attention to establish such plants to produce ethanol to be used with diesel to meet the demand. And, obviously corn can be the one of the resources for the same.

This is the need of the hour to replace authentic fuel in automobiles as it emits harmful components like CO, CO2, NO2 etc. Bio-fuel helps engine to perform and emit less pollutant. Many additives can be used to improve the performance in terms of power generation and speed.  Manigadan S. et al. [12] investigated the emission characteristics of corn oil blended with methyl ester and oxygenated additives. In this study, BSFC and BP have been increased by 6.3% and 22.01% respectively. And, 16% reduction in NOx emission has been observed, Titanium di-oxide (TiO2) has been used as additive. But, many oxygenated nanoparticles like aluminium oxide etc. can be used to improve the performance, as well.