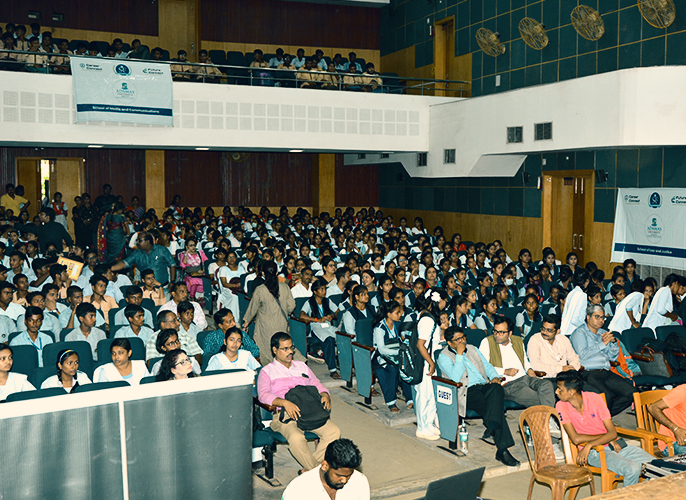 MILLIONS of students, with dreams of bright future, appear for the momentous 12th board examinations each year. What most of these students share in common are their lofty ambitions, ardent dedication and unswerving determination to make it big. What many of them often lack, especially those students who pursue their schooling in the most far-flung corners of the country, is proper career counseling that equips them with the information needed for identifying the right career path, choosing the most befitting higher education programs and effectively steering them towards their dream careers. As a commendable initiative to bridge this gap, the Krishnanagar Education Conclave, held on September 20 in West Bengal’s Krishnanagar, turned out to be a huge success, with over 700 students from various schools, along with a large number of parents and teachers, attending and reaping benefit from it.

This outreach program, sponsored by Adamas University, which is relentlessly pursuing its vision of being the hub of interdisciplinary education, research and innovation, focused on reaching out to the student community that resides on the outskirts of towns and cities in West Bengal. The aim was to provide these students much-needed career counseling, which would empower and enable them in choosing the right career path after their 12th board exams. The Krishnanagar Education Conclave held in collaboration with the Samit Ray Foundation saw an overwhelming participation of students from the peripheral areas of the state and reflected their keen and praiseworthy interest in planning for their careers and life goals. It also brought to light their acute awareness concerning the importance of career counseling. Dr. Naveen Das, the Pro Vice Chancellor, Academic Affairs and Dean, School of Business and Economics at Adamas University, described his first experience in such a school outreach programme as “overwhelming”.

He added, “I felt that in spite of coming from schools, which were not in the mainstream, the students were so agog to learn from us and also take a decision for their career paths ahead.” Chandrajit Mitra, Senior Vice President, Institutional Connect & New Projects, talked of his memorable experience at the Krishnanagar Education Conclave and said, “I didn’t expect this kind of vibrant environment that the students and the faculty members and all of us, who have come from Adamas University, could create. Particularly, the students showed their interest in their career paths, their planning, etc. during the counseling sessions and I, along with my colleagues, thoroughly enjoyed our interaction.” Praising the level of awareness that the students exhibited and their sincerity towards their life goals,he exclaimed,“Hats off to the teachers and the schools around,who are producing such students.” He further stated,voicing his conviction, “I think these are the future of our country.” Emphasizing the importance of this education conclave, he concluded, “If we continue this good work, in the days to come, Bengal will again reach the heights that it deserves.” It goes without saying that the overwhelming response received at the Krishnanagar Education Conclave has paved the way for similar future endeavors, which lay the groundwork for successful careers of countless students, arrived at, through informed decisions. ADVERTORIAL Krishnanagar Education Conclave The immensely successful education conclave, sponsored by Adamas University, provided valuable career counseling to hundreds of students from the peripheral areas of West Bengal. Professors along with Mr. Chandrajit Mitra Senior Vice President, Institutional Connect & New Projects Adamas University during the light lamp ceremony. Mr. Chandrajit Mitra Senior Vice President, Institutional Connect & new Projects along with the  Additional DM of Nadia district Sri Shrinivas Patil. Communicator addresset the mammoth gathering.