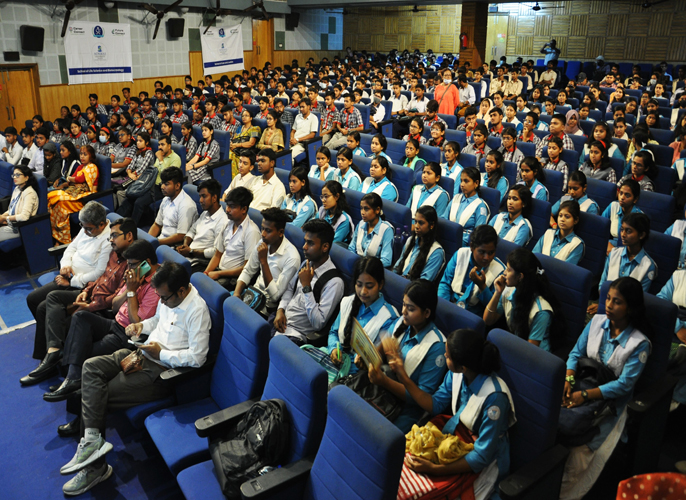 Berhampore Education Conclave ADVERTORIAL The Berhampore Education Conclave sponsored by the Adamas University, received an unprecedented and overwhelming response from the students of the area and brought to light their keen interest in participating in such outreach programmes. Dr. Naveen Das, the Pro Vice Chancellor, Academic Affairs and Dean, School of Business and Economics at the Adamas University FAILINGto prepare is usually described as a recipe for preparing to fail and this holds true for career planning as well. Access to resources that facilitate proper career planning,assumes great significance for the young generation, as it is on the threshold of pursuing higher education in a chosen discipline that will lay the groundwork for a fruitful career.A plethora of career options that students can choose to pursue nowadays merely aids in compounding their perplexity and further emphasizes the need for comprehensive career counselling,early on.

The recently held,Berhampore Education Conclave,which had been sponsored by Adamas University & Samit Ray Foundation (SRF), turned out to be groundbreaking in this regard,as it aimed at enabling students from the outskirts of towns and cities in West Bengal reap the benefits of indispensable career counselling sessions offered by experts. The Berhampore Education Conclave, held in West Bengal’s Berhampore, was modelled on the equally successful educational conclave that was previously organized in Krishnanagar by  the Samit Ray Foundation,a subsidary of  Adamas University and RICE Education.Both the events,that took place within a few days of each other,met with resounding success and exceeded expectations in terms of the number of career- conscious students that attended these enriching educational conclaves,along with their equally inquisitive and enthusiastic parents.The great gusto with which the student community of Berhampore and the teachers from various schools participated in this outreach programme was commendable as well as unprecedented and took the organizers by surprise. Despite coming from a peripheral region of the state of West Bengal, the students, Mr. Chandrajit Mitra Senior Vice President, Institutional Connect & new Projects greeting the chief guest Sri Nirmalya Gharami, WBCS, Additional DM, Murshidabad district.

Academic Heads of Adamas University who attended this event, exhibited not only astounding levels of interest in planning for their careers but also full cognizance of the significance of career counselling provided by highly experienced professionals from the domain of education. Describing his experience at this education conclave as being “very delightful”, Dr. Naveen Das, the Pro Vice Chancellor,Academic Affairs and Dean, School of Business and Economics at the Adamas University,lauded the active participation of the students.He said,“The students of Berhampore, especially in schools like Kendriya Vidyalaya,J.N.Academy,etc.,were very knowledgeable,very vibrant and extremely upbeat about knowledge that they wanted to inherit.”Speaking of the engaging counselling session, which received a “very overwhelming response”,he remarked,“Our professors from different schools also excited them with knowledge,with examples and with activities.” Referring to the Berhampore Education Conclave as an “eye-opener”,Chandrajit Mitra, Senior Vice President, Institutional Connect & New Projects, described the counselling session as “fantastic”.He shared his experience concerning these students’ interest in different streams and stated,“We found a lot of students coming over and asking a lot of interesting questions,which were very insightful.”As he extolled the participation of students in the event in droves,he added that their response was marked with “keenness,curiosity and quest to learn.” Emphasizing the need for organizing more of such educational conclaves,especially in the farflung places of West Bengal, Chandrajit Mitra concluded,“Such kind of conclaves must continue.”Dr.Das seconded it and added,“We will be more than happy and keen to conduct such kinds of workshops,such kind of conclaves in the near future across all cities of this stature.”